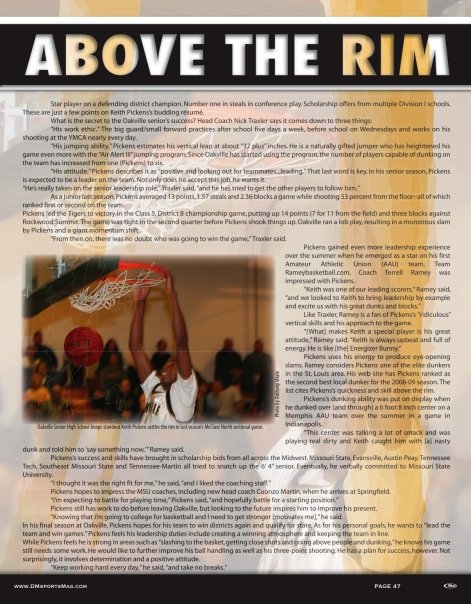 Star player on a defending district champion. Number one in steals in conference play. Scholarship offers from multiple Division I schools. These are just a few points on Keith Pickens’s budding résumé.

What is the secret to the Oakville senior’s success? Head Coach Nick Traxler says it comes down to three things:

“His work ethic.” The big guard/small forward practices after school five days a week, before school on Wednesdays and works on his shooting at the YMCA nearly every day.

“His jumping ability.” Pickens estimates his vertical leap at about “32 plus” inches. He is a naturally gifted jumper who has heightened his game even more with the “Air Alert II” jumping program. Since Oakville has started using the program, the number of players capable of dunking on the team has increased from one (Pickens) to six.

“His attitude.” Pickens describes it as “positive and looking out for teammates, leading.” That last word is key. In his senior season, Pickens is expected to be a leader on the team. Not only does he accept this job, he wants it.

“He’s really taken on the senior leadership role,” Traxler said, “and he has tried to get the other players to follow him.”

As a junior last season, Pickens averaged 13 points, 1.57 steals and 2.36 blocks a game while shooting 53 percent from the floor — all of which ranked first or second on the team.

Pickens led the Tigers to victory in the Class 5, District 8 championship game, putting up 14 points (7 for 11 from the field) and three blocks against Rockwood Summit. The game was tight in the second quarter before Pickens shook things up. Oakville ran a lob play, resulting in a monstrous slam by Pickens and a giant momentum shift.

“From then on, there was no doubt who was going to win the game,” Traxler said.

Pickens gained even more leadership experience over the summer when he emerged as a star on his first Amateur Athletic Union (AAU) team, Team Rameybasketball.com Coach Terrell Ramey was impressed with Pickens.

“Keith was one of our leading scorers,” Ramey said, “and we looked to Keith to bring leadership by example and excite us with his great dunks and blocks.”

Like Traxler, Ramey is a fan of Pickens’s “ridiculous” vertical skills and his approach to the game.

“[What] makes Keith a special player is his great attitude,” Ramey said. “Keith is always upbeat and full of energy. He is like [the] Energizer Bunny.”

Pickens uses his energy to produce eye-opening slams. Ramey considers Pickens one of the elite dunkers in the St. Louis area. His web site has Pickens ranked as the second best local dunker for the 2008-9 season. The list cites Pickens’s quickness and skill above the rim.

Pickens’s dunking ability was put on display when he dunked over (and through) a 6-foot-8-inch center on a memphis AAU team over the summer in a game in Indianapolis.

“This center was talking a lot of smack and was playing real dirty and Keith caught him with [a] nasty dunk and told him to ‘say something now,'” Ramey said.

Pickens’s success and skills have brought in scholarship bids from all across the Midwest. Missouri State, Evansville, Austin Peay, Tennessee Tech, Southeast Missouri State and Tennessee-Martin all tried to snatch up the 6’4″ senior. Eventually, he verbally committed to Missouri State University.

“I thought it was the right fit for me,” he said, “and I liked the coaching staff.”

Pickens hopes to impress the MSU coaches, including new head coach Cuonzo Martin, when he arrives at Springfield.

“I’m expecting to battle for playing time,” Pickens said, “and hopefully battle for a starting position.”

Pickens still has work to do before leaving Oakville, but looking to the future inspires him to improve his present.

“Knowing that I’m going to college for basketball and I need to get stronger [motivates me],” he said.

In his final season at Oakville, Pickens hopes for his team to win districts again and qualify for state. As for his personal goals, he wants to “lead the team and win games.” Pickens feels his leadership duties include creating a winning atmosphere and keeping the team in line.

While Pickens feels he is strong in areas such as “slashing to the basket, getting close shots and going above people and dunking,” he knows his game still needs some work. He would like to further improve his ball handling as well as his three-point shooting. He has a plan for success, however. Not surprisingly, it involves determination and a positive attitude.

“Keep working hard every day,” he said, “and take no breaks.”