Republished from The Maneater 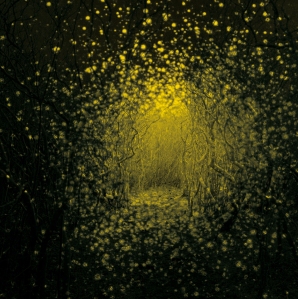 Not to be confused with a certain basketball cheering section, Brooklyn-based post-rockers The Antlers will release their fourth studio album, Burst Apart, on May 9.

The band found widespread acclaim and notoriety with 2009’s Hospice, an album focused on (at least metaphorically) a terminally ill hospital patient. Following such a dark breakout release, the band took a different direction with Burst Apart.

The album is much more upbeat, as one might expect. No one wants to sing about death forever. There is some genuine groove at times, such as the jaunty bass on “I Don’t Want Love.”

Happiness is a feeling that is emitted here, (at least somewhat) unlike on Hospice, yet there is still a haunting feeling at times, as if the ghost of Hospice isn’t quite ready to go away. Given the quality of that record, it is probably a good thing that it lingers to some extent, but it is a different kind of haunt in Burst Apart. Rather than cathartic tenderness, The Antlers take a sprawling approach to their sound. Burst Apart is vast and layered, whereas Hospice had more of a respondent echo.

Burst Apart is a very methodical listen. Each emanation is carefully planned out and given time to mature before exposing itself. The album is strangely capricious, giving off a different vibe with each listen. This is a testament to both the diversity and depth of the album.

Burst Apart will probably not get as much love as Hospice, and that’s not any big surprise. Funerals are not exactly everyone’s favorite gathering, but they produce emotion without fail; so it was with Hospice. For this new release, however, it’s a little trickier to find focus without such a definite subject. Nonetheless, Burst Apart is a commendable effort.

The album is currently streaming at NPR.org.