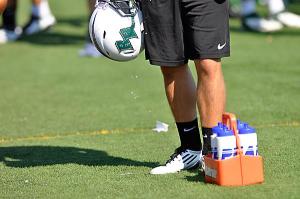 COLUMBIA — With the effects of Hurricane Isaac expected to come pouring down on Friday afternoon in St. Louis, rain will be on everyone’s mind for that evening’s game between Rock Bridge and Fort Zumwalt West.

But Bruins tailback Freeman Simmons, wide receiver Kenny James and quarterback Logan Twehous, will be looking to get some other elements up and running.

“Like earth, wind and fire, that’s what we can be,” said James, whose versatility allows him to rack up yards through the air and on the ground.

After the Bruins used an impressive aerial attack in their season-opening victory against De Smet, wind seemed to be the only element in command. James and Simmons, both seniors, gained only 90 combined rushing yards against the Spartans.

Simmon’s focus is less on big numbers and more on one letter.

“As long as you can get that W, you know?” he said. “Coach (A.J.) Ofodile already told me, ‘You just gotta be patient, and stuff will happen for you.’”

Twehous praised the two seniors’ ability to score from anywhere on the field, but stressed that there’s more to the Bruins’ offense.

“The thing is, it’s not just them,” he said. “Our full receiving corps is very, very talented. All of them are capable of making big plays. Kenny and Freeman are the two that did it last year, so we expect them to do it again.”

A.J. Ofodile said he hopes his team can perform well on the ground against Fort Zumwalt West.

“It’s very important,” he said. “I don’t think we necessarily focused on the pass (last week). From a play selection standpoint, I think we were pretty balanced, but the yardage obviously didn’t balance out. We didn’t run the ball real well. Way too many mistakes in terms of blocking assignments to be effective.”

If the Bruins, ranked No. 4 in the state poll this week, patch up those errors, they have a lot potential at the tailback spot.

“We think we’ve got a special ball carrier with Freeman,” A.J. Ofodile said. “He’s worked real hard over the last couple of years to develop himself in the weight room, so now he runs with a certain amount of power for a not particularly big guy.”

A.J. Ofodile said James’ role in the running game is a way to maximize the all-state receiver’s involvement on offense.

“You just try to figure out ways to get the ball into Kenny’s hands,” he said. “We didn’t do a real good job of that last week.”

Twehous was a lone bright spot in the Rock Bridge running game against De Smet. The sophomore quarterback tallied 69 yards on foot in his starting debut, including a 30-yard option run on fourth-and-2 that kept a fourth-quarter scoring drive alive.

With the remnants of a hurricane passing through, one might expect the Bruins to avoid throwing the ball as much as possible on Friday, but A.J. Ofodile said, barring another natural disaster, Rock Bridge won’t be altering its game plan.

“Short of it being a monsoon, it won’t change anything that we do,” he said. “It doesn’t have as much effect as it used to, now that everybody’s (got) turf.”