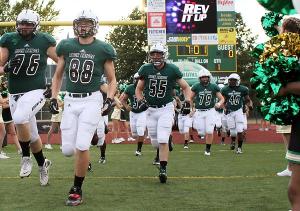 COLUMBIA — Last-minute studying is nothing new for high school students. But when Rock Bridge junior Jace Neville was cramming last week, it wasn’t algebra or calculus. It was Xs and Os.

Neville, normally a defensive end, flipped sides to fill in at offensive tackle for the Bruins. With two blockers out because of injuries and another two plagued by illness, he had one practice and two short days to prepare.

Sophomore Jonah Dubinski, who had been playing offensive line on the junior varsity team, also had half a week to acclimate himself before stepping in at left guard on the Bruins’ varsity team before a matchup with Har-Ber High School of Arkansas last Friday. The two novices didn’t disappoint.

“He came in and did a great job,” Ofodile said. “He fought, and he gave us the best he had.”

Praise is nice from a coach, but it carries more weight coming from the player whose well-being rests in the linemen’s burly arms.

“They did a lot better than I thought they were going to,” quarterback Logan Twehous said after the Bruins’ 27-16 victory over Har-Ber. “I thought we were going to struggle a little bit more. They held their own out there.”

Neville said playing on the opposite side wasn’t an impossible transition, especially because he played offensive line last year for the Bruins. But there was still a shift, nonetheless.

“That first day, it was a different mindset to get into,” he said. “Now I’m defending instead of attacking.”

Neville and Dubinski had some preparation from summer camps and from going against the monstrous Rock Bridge interior line of seniors A.J. Logan and T.J. Smith while practicing last week.

“We knew maybe at some point we might need to be called up, and when we got called up we did what we were supposed to do,” Dubinski said.

Dubinski was happy to make his varsity debut, and it was no snoozer. The Bruins turned the game around when tailback Freeman Simmons’ fourth quarter, 93-yard sprint to the end zone recaptured the lead for Rock Bridge.

“I was just excited,” Dubinski said of the play. “That’s really the only way I can describe it. Really excited.”

He and Neville will have a chance to pave more holes for Simmons on Friday against Raymore-Peculiar High School. While some linemen will be returning, Ofodile said he intends to use the two “one way or another.” The Bruins will benefit from having Neville and Dubinski on the depth chart, he said.

“We’ve discovered a couple guys who can get the job done and get us out of some games,” he said.