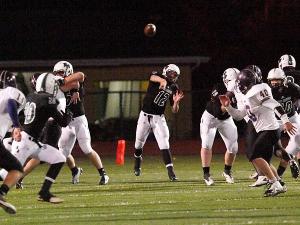 COLUMBIA — Rock Bridge football fans are used to hearing the name “Eli Caldwell-Stout” over the loudspeakers on Friday nights. What they’re not used to is hearing the words “on the carry” following his name.

The junior outside linebacker started at tailback on Friday and punched in two touchdowns as the Bruins rolled to a 34-0 victory over Troy Buchanan High School.

With starting tailback Freeman Simmons out for at least two weeks with a sprained MCL and backup Tarus Moore in street clothes for violating team rules, coach A.J. Ofodile planned to use senior tailback Jon Kimbro along with Caldwell-Stout in the backfield. After Kimbro injured his ankle in practice this week coach Ofodile handed the duties to Caldwell-Stout.

“Eli was in the mix for us (as a tailback) over the summer, but we needed him on defense, so we kind of pulled him out of that race,” Ofodile said. “He was a guy that knew the offense already.”

Caldwell-Stout scored two touchdowns before leaving the game with leg cramps in the third quarter. Senior receiver Kenny James then stepped in and scored on a 22-yard run with 1:58 remaining in the third quarter. The drive was set up by a fumble recovery on a botched punt by junior Sabien Cook on the Troy Buchanan 41 yard line.

“Initially, we planned on rotating Kenny in a little earlier, and I should have,” Ofodile said. “That’s kind of what led to the cramping issue with Eli. You start playing twice the reps you’re used to playing, and he plays full speed, breakneck pace, and we gave him the ball quite a bit, so it ended up causing him to cramp a little bit.”

Thanks to the Bruins’ bevy of offensive weapons, Rock Bridge hardly missed a step, even with Ofodile’s fifth option at tailback.

“That was such a good feeling, knowing that Kenny could back me up, just knowing that we’re there for each other no matter what,” Caldwell-Stout said.

Although Caldwell-Stout finished the game on the bench, the Bruins had already established a sizable lead by the time he passed the reigns off to James.

“(Caldwell-Stout) ran the ball extremely well,” Ofodile said. “We knew he would. He did all summer. He did in practice this week. He gets downhill extremely quick. He’s explosive. He is definitely a quality running back.”

The Bruins’ four rushing touchdowns provided a sufficient cushion for a stifling Rock Bridge defense. With a 28-point lead, coach Ofodile called on his the second-string defense to start the fourth quarter.

Yet with one second on the clock and the ball at the Rock Bridge four yard line, the defensive starters returned to the field to try to preserve the Bruins’ first shutout of the season. And preserve it they did.

The Bruins’ defensive front batted a play-action pass by Troy Buchanan quarterback Ben Chaney into the air, which eventually landed in the hands of senior safety Shelby Wilson, who returned it 96 yards for a touchdown.

“(It was) great for a great young man to close out a game in that way,” Ofodile said. “He’s well deserving.”

The Rock Bridge defense continually shut down the Trojan defense, despite some Troy Buchanan success on the option run.

The Bruins will play at Hickman next week in a rematch of the Providence Bowl, which resulted in a 22-21 victory for the Kewpies earlier this season. Hickman defeated Timberland 34-14 at home on Friday to advance to the Class 6, District 3 tournament.

“I just need to know that since we played them, we kinda know what they’re gonna do, but we just need to focus and have the greatest week of practice we’ve ever had,” Caldwell-Stout said.

The Bruins had a hunch that they would get another shot at the Kewpies if they won their final regular season game against Jefferson City and advanced past the first round of the playoffs.

“I’m really excited,” Logan said. “I’m beyond focused to get back at them. If we could play them right now, I would.”