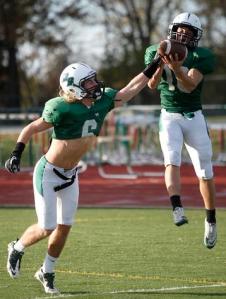 COLUMBIA — They say defense wins championships. For Rock Bridge football, one thing’s for sure: It wins coin tosses.

All four Rock Bridge captains, who walk hand-in-hand to midfield and call heads or tails before each game, are defensive players: tackle A. J. Logan, linebacker Matt Bush and safeties Shelby Wilson and West Wilson.

“It shows that we really are a defensive team,” Logan said. “We’ve pretty much shown the entire season, and for the last couple years, that we’re really stout on defense.”

Logan makes the calls on all coin tosses, and if it lands in Rock Bridge’s favor, the captains always choose to defer. This means the Bruins’ defense is the first to take the field.

“We’re all looking to get out there and make a statement right away,” Shelby Wilson said.

The designation as captain is not one Logan takes lightly.

“It means a lot,” he said. “I’ve been waiting on it for four years. I feel like I put in the work, and it feels good to be recognized for it.”

Besides heads or tails, Logan said there’s only one thought going through his head as he stands at the 50-yard line each pregame:

Shelby Wilson and West Wilson are both safeties. They both have the same last name. Their families are both involved in rodeo activities.

They are not, however, related.

“We told everyone in sixth grade, actually, that we were,” West Wilson said. “So half the school still thinks we’re cousins. Which we’re unfortunately not.”

Besides the obvious difference in hair style — West Wilson’s long blonde locks can be seen flowing out the back of his helmet, while Shelby Wilson sports a tidy, dark-haired cut — the two might as well be cousins.

“We’re good friends and side by side all the time,” Shelby said. “We hang out a lot, on and off the field.”

Shelby Wilson participates in the Missouri Rodeo Cowboys Association summer circuit as a calf roper. While West Wilson said his brother and father are more involved in rodeo activities than he is, he has roped cattle with Shelby Wilson and the two families are friends with each another.

Rock Bridge coach A.J. Ofodile said the roles of Shelby Wilson and West Wilson as the last defense for the Bruins builds a natural rapport between the two.

“I think that with that position being so intertwined and so dependent on each other, those guys have to communicate all the time,” Ofodile said. “Besides sharing a last name, I think just the nature of what they have to do out on the field makes a natural bond between those guys.”

For two weeks, the captains’ pregame stroll was missing one set of shoulder pads. Out with mononucleosis, Bush had to miss the Bruins’ games against Liberty and Jefferson City. But it was important to Bush that he didn’t miss the coin-toss ceremonies as well.

“It made me feel like I was still a part of the team, like I was still helping out. Like in the movie ‘Undefeated,’ I felt like it was a Money kind of situation, but my team still supported me,” he said, referring to the 2011 Oscar-winning high school football documentary in which lineman Montrail “Money” Brown misses significant time with an injury. The Bruins watched the movie as a group before their 35-6 win over Helias Catholic High School.

Though Bush couldn’t contribute between the sidelines, he found a role to fulfill off the field.

“I was just really disappointed that I couldn’t support my team on the field, but I was going to do all I could off the field,” he said. “I was mainly supporting and coaching the other guys, just making sure they were doing what they were supposed to at the linebacker position.”

Ofodile spoke about the importance of getting Bush back before the Troy Buchanan game.

“It’s huge,” Ofodile said. “He’s kind of our defensive leader. He’s probably, in our front seven, the guy that processes things the quickest, gets to the ball the fastest, the most veteran, most experienced guy we’ve got back there. He’s a captain for us for good reason, so having him back is a big lift.”

Thankfully for Bush, he is back in pads in time for the Bruins’ Providence Bowl rematch against Hickman on Friday, a game he can’t imagine missing.

“That would be devastating,” Bush said. “This is what we live for at Rock Bridge.”