Republished from the Columbia Missourian. Click here for PDF version.

This story was a part of the Columbia Missourian’s Michael Sam package, which received a third-place award in the 2015 Missouri Press Association Better Newspaper Contest. 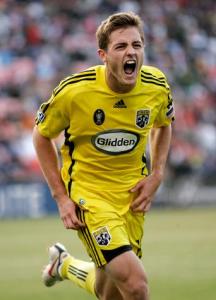 Former NFL player Wade Davis, on the other hand, spent his entire football career trying to hide his own sexuality.

Davis, who came out as gay in 2012, eight years after his retirement, said he became obsessed with appearing heterosexual after teammates told him that spending time with a player thought to be bisexual would hurt his reputation.

“My experience was me being very hyper-vigilant,” he said. “I remember watching film of myself thinking like ‘Wow, you’re running gay, you’re standing gay, you’re just being gay.'”

Davis said he learned of Sam’s sexuality in January through his affiliations with the NFL. Davis is the executive director of You Can Play, a project that fights homophobia within sports.

Davis met with Sam on Saturday evening in Los Angeles, a day before Sam’s announcement was to go public.

“He’s a great kid,” Davis said Sunday night of Sam, whom he had never met previously. “He’s full of life, full of love, and I can’t wait to watch him play.”

Though an openly gay player has not yet played a game in the NFL, Major League Baseball, NBA or NHL, American soccer player Robbie Rogers came out as gay in February 2013. He briefly stepped away from soccer before joining the Los Angeles Galaxy. In May, he became the first openly gay male player to compete in a professional sports league in the U.S.

Rogers said Sam contacted him through a friend.

“I’m happy if this will bring him peace and that he can live a complete life where he can play his sport and be out with his family and friends,” Rogers said Saturday. “It’s going to be an interesting year for him, but I’m excited for him.”

Davis said he was nowhere near comfortable coming out during his time in the NFL. He was on the practice squads for Tennessee, Seattle and Washington but never played on a 53-man roster.

The league has changed drastically in the 10 years since his retirement, Davis said. You Can Play members talked to NFL players about whether they would be welcoming of a gay player. The players would, Davis said.

Davis said there were other closeted gay players when he was in the league. He also said there are currently players in the NFL who have told their teams they are gay but not the public.

Sam, in an interview with ESPN, said that part of the reason he made his announcement now is because NFL teams were already aware of his sexual orientation.

Davis said that teams “100 percent” would have found out Sam is gay, through scouting.

“I think that people often associate the fact that if someone hasn’t made this public statement that they’re in some way hiding,” Davis said. “I don’t think (Sam) was hiding. And I think it speaks volumes to the fact that he played in probably the most competitive conference in all of college football and was a starter and a multi-year starter and his teammates, from what I know, didn’t have a a problem with it.”

Sam said he notified his teammates in August that he was gay. He went on to have one of the most prolific seasons in Missouri history, producing 11.5 sacks and winning SEC defensive player of the year.

How will the news affect Sam’s draft stock? That’s to be determined. The 6-foot-2, 255-pounder was projected as a mid-round pick before his announcement.

“I’m not worried about his draft stock slipping,” Davis said. “I’m more worried about will he have freedom just to say, ‘Hey, I want to spend the next four or five months becoming the best football player that I can be.'”

Both Rogers and Davis said it was crucial that Sam was able to come out under his own volition.

“When you announce your sexuality, you wanna do it on your own terms in your own voice in the way that you want it,” Davis said. “The last thing that someone wants is to be outed or to not be able to tell their story in their own words.”

NBA player Jason Collins came out last year in a Sports Illustrated article, but that was after the season, and the career journeyman has not been signed by a team since. Davis said he doesn’t believe Collins is being blacklisted, but rather that it’s a business matter. Collins has averaged just 3.6 points in his career and is playing in a league in which big men like him have become devalued in recent years, in favor of quicker lineups.

“Would an owner wanna bring on a guy who’s gonna be maybe eighth or ninth off the bench but have that guy create a distraction?” Davis asked rhetorically.

Collins could not be reached for comment for the story.

Sam is 24. Rogers came out at 25, but he said he would not have been ready to come out right after college. He said locker room culture was one obstacle to his coming out.

“Before I came out, growing up, I always heard stuff in locker rooms, which obviously kind of scarred me and made me scared to come out,” Rogers said.

Rogers said he is lucky to live “in a bubble” in Los Angeles, where he was born and raised. He hopes Sam, a Texas native, ends up in a place that is more in need of a culture change, he said.

“I hope he goes to a team somewhere in the South,” he said. “Somewhere that isn’t used to — or, I guess no one’s going to be used to an openly gay football player — but a place that needs to change a little bit more.”

Davis said that such narratives are dated, and he has seen gay youth struggle just as much in New York as in the South.

“I think it’s much healthier that way,” Rogers said. “It’s the exact opposite of what I did, and it’s definitely not healthy to keep all that stuff inside you for so long.”

Davis believes that having an openly gay NFL player could shift the perception of the LGBT community in society at large.

“There are a lot of people who watch the game who base their ideas of masculinity and manhood on the sport of football because we see these players as gladiators,” Davis said. “The fact that you can turn on your TV and watch an openly gay male play will really help to shape peoples ideas about what it means to be a man.”

Rogers also said the exposure was a big factor.

“I think (Sam) really will show people that maybe haven’t been exposed to gay men and women that we’re not different, that we’re the same,” he said. “That we’re athletes, that we’re teachers, that we’re lawyers and we just wanna play our sport and fall in love just like them and have the same rights.”

Davis said that Sam would “become a sensation” immediately.

“This kid is going to save a lot of lives,” Davis said.