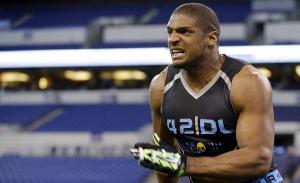 When Michael Sam spoke at an NFL combine press conference in Indianapolis on Saturday, he left a good impression. In front of what some have called the biggest crowd ever at such a press conference, Sam, who recently announced he was gay, emphasized his desire to focus on football, and most were pleased with his showing.

Monday was a different story.

Sam ran a 4.91-second 40-yard dash, 18th among 40 defensive linemen. He bench pressed 225 pounds 17 times, tied for worst at his position. The word disappointing was floated by many a media member.

Charles Davis, an analyst for NFL Network and NFL on Fox, was not one of them.

“I think what people were really looking for is to be surprised,” Davis said, “and when they weren’t surprised, I feel like they termed it disappointment.”

There was one area, however, in which Sam failed to meet Davis’ projections. Sam’s vertical jump measured only 25.5 inches, 40th among 43 defensive linemen.

“I was expecting him to be a little more explosive,” he said. “He’s obviously got a really powerful-looking lower body.”

Caputi was also disappointed by Sam’s fluidity and 40-yard-dash. Some scouts have eyed Sam as a linebacker, which he tried out at the Senior Bowl, but Caputi doesn’t believe Sam has the skills to make the transition.

“He hasn’t had to do that,” Davis said. “And in the drills I saw at the Senior Bowl and here at the combine, I don’t believe that that’s his forte.”

Davis believes Sam can play as a situational pass rusher and contribute on special teams.

Sam is facing extra scrutiny as the first openly gay NFL prospect, but that’s irrelevant when it comes to the combine, Davis said.

“For every candidate that comes through, for every person that’s a potential NFL draft choice, they’re all going through the same microscope and prism,” Davis said. “Are we spending extra time reporting on him? Of course we are. That type of announcement brings you that extra scrutiny, and people are gonna want to know how he did and are going to be more curious about him than a lot of other players.”

Davis, who projects Sam to go between the third and fifth rounds, said comparisons could be made between Sam and Philadelphia’s Trent Cole, who also fits physically between a linebacker and a defensive end. Caputi mentioned Cole as a comparison as well.

“He can be that kind of player on the high end, I think,” Caputi said. “He’s a good pass rusher, and he proved it while he was at Missouri.”

While the minutia of the combine can seem over-the-top at times, Davis said the scores really are important because they give the teams a way to compare players to past players.

“A lot of times we say to ourselves, ‘This is crazy. What does this have to do with playing football?’” he said. “Well, sometimes it doesn’t, but it has to do with measuring a person as an athlete.”

Sam will be looking to improve his numbers when Missouri holds its Pro Day on March 20 in Columbia. Davis said those workouts serve as a player’s “mulligan day.”

“I’m sure he’d like to have us all go, ‘Hey, did you see Michael Sam on his Pro Day? Did you see how he improved his numbers?’” Davis said. “That’s a much better narrative than what he’s having to go through right now.”