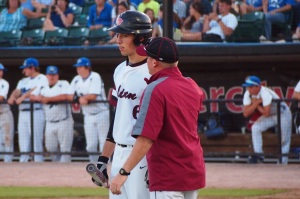 A swing and a miss.

Warrior pitcher Daniel Bergtholdt struck out Cameron Laughlin on a 2-2 pitch to wrap up the contest, recording his 15th strikeout of the evening. The 6-foot-5 left-hander handcuffed the Wildcats on the night en route to a 4-0 complete-game win at T.R. Hughes Ballpark.

“We just didn’t offensively give ourselves a chance,” Linn coach Colby Nilges said. “We had times, we had runners, but we were just lacking that hit. It’s pretty obvious, too many strikeouts tonight, but that’s a good left-handed pitcher. To me, he’s got a bright future.”

The Wildcats had their chances. Shortstop Alec Shoop singled and left fielder Ben Klebba doubled him to third with one out in the fourth inning, but Bergtholdt responded with a streak of four strikeouts that would carry on into the fifth.

“At this level, when you leave runners, especially at second and third, it’s pretty big,” Nilges said. “Because runs don’t come easy at this level. We just couldn’t come up with that timely hitting and get runners across the plate.”

Linn first baseman Eathan Hickey began the bottom of the seventh with a single and Kyle Nolting had another two batters later, but the Wildcats failed to plate a runner, as Bergtholdt ended the game by boosting his strikeout total.

“Nine hits against a good Valle Catholic team? I think for the most part we held them in check,” Nilges said.

Nilges was happy with starter Ryan Mantle’s performance. Nilges said it was a group decision made by the team to start Mantle, who pitched the first six innings for Linn, allowing three earned runs.

“He went out there and he did what we completely asked him,” Nilges said of his starter. “We just didn’t put much offensive stuff on the board.”

Bergtholdt hurt Linn at the plate as well as on the mound. He went 3-4 with two RBI and a run. In the fifth, he came to the plate with two outs and a runner on second. Nilges decided to have Mantle pitch to him, and Bergtholdt drove in pinch-runner Cole Wood with a single on a 3-2 pitch.

“We don’t intentionally give people bases, and that’s something we’ve traditionally (followed),” Nilges said. “Because we’re capable of getting anybody out. But that is a good team. It crossed my mind to put people on, but I don’t think in the situation it would’ve worked for us.”

With the loss, Linn plays in today’s third-place game against Archie at 10:30 a.m.

Linn said motivating his team after losing a chance at the state title won’t be a problem.

“These guys are going to come ready to play,” he said. “They do every day.”

Archie lost to Hartville 8-3 in Monday’s first semifinal. Valle Catholic will play Hartville for the championship at 1 p.m.

“We’re not going to totally hang our head,” Nilges said. “Yeah, we’d rather be playing (today) at 1, but we’re going to come (today) for the third-place game and try again and give it our best.”