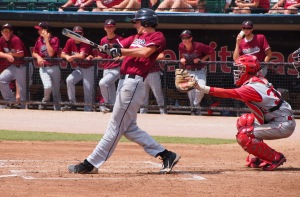 O’FALLON, Missouri — The Linn baseball team came to T.R. Hughes Ballpark to win a Class 2 championship. But when a 4-0 semifinal loss to Valle Catholic denied the Wildcats that goal, they picked up a new one: third place.

On Tuesday, Linn reached its new goal. The 10th-ranked Wildcats defeated Archie 8-1 to end their season with the best finish in school history.

Klebba hit three singles, scored two runs and drove in another in addition to picking up the win on the mound thanks to three innings of shutout relief. Despite giving up leadoff singles in the fourth and fifth, Klebba pitched to the minimum nine batters thanks to two double plays.

“Ben progressively every game, every inning, every out, gets better and better and better, and it’s good to see that, because I think he’s gonna be something to deal with in the future,” Linn coach Colby Nilges said. “We felt comfortable we could go to him in any situation and hold things in check.”

Klebba, who started the game in left field, provided relief in Monday’s game as well, pitching a 1-2-3 seventh.

The Wildcats answered Archie’s unearned run in the third inning with one of their own. Cameron Laughlin reached on an error by the Whirlwinds’ third baseman, stole a base and scored on Klebba’s single.

But the majority of Linn’s damage came in the fifth. Between Laughlin’s fly outs to begin and end the inning, the Wildcats scored six runs on seven straight hits, including a double off the wall by Daulton Niederhelm and a deep triple by Kyle Nolting.

“It felt like a cat was in the bag and was about ready to get out,” Nilges said. “It was coming. We felt it.” 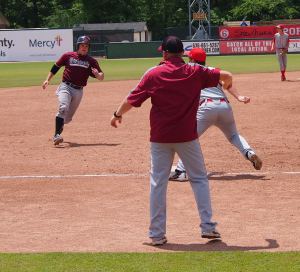 It was the only inning of the Final Four in which Linn scored more than one run.

“I knew it was going to come sooner or later,” Klebba said. “We always have an inning like that where we … have a bust-open inning. We got their real good pitcher out of there and some of their younger pitchers in, and we started hitting on them.”

Linn continued to punish Archie’s relievers in the sixth. The Wildcats reached on two singles and two walks and stretched their lead to seven.

Linn began the game with four strikeouts in the first two innings, including three bases-loaded whiffs in the second — one day after Linn struck out 15 times against Valle Catholic.

“We were just a slight bit off today and probably had a little bit of a hangover from last night — on the field,” Nilges said, clarifying with a chuckle. “It was just a matter of time. We knew the bats were going to come out at some point.”

Though the strikeout bug carried over, Nilges said the Wildcats didn’t need any help bouncing back from Monday night’s loss.

“They woke up this morning, ate breakfast and they were in a good mood and ready to go,” he said. “It’s been a good experience for us all. We got to spend time with the guys. It’s fun to be around them because they’re so close.”

Blake Snyder pitched a hitless seventh for the Wildcats, striking out two.

Tony Mebruer went 3-for-4 with one RBI for Linn, while Niederhelm ended up 2-for-3 with three RBI. Shoop, Eathan Hickey and Kyle Nolting had one hit and one RBI apiece.

This was Linn’s second-ever trip to the Final Four in baseball. In 2009, the Wildcats lost the semifinal as well as the third-place game. Improving on that mark was not a focus for Linn, Nilges said.

“‘Better than ’09’ was never really a thought,” he said. “It was never mentioned by any of the guys or anything. They wanted to go out and get a state championship.”

Valle Catholic achieving that goal Tuesday, as it blew out Hartville 13-2 in the title game. However, Nilges was proud of Linn for finishing its historic season on a high note.

“That’s big for all of us,” he said. “I mean, the guys, myself, these fans, the staff at the school, everybody works so hard to give these kids the best opportunity they can.