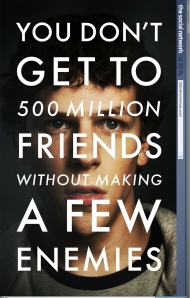 It is a bit of an understatement to call “The Social Network” interesting. The movie focuses on the creation of arguably the greatest social phenomenon of the past decade. The abnormally young cast includes the next Spiderman (Andrew Garfield), an actor who plays two characters (Armie Hammer) and a former boy band demigod (Justin Timberlake), not to mention the protagonist, the perennially awkward Jesse Eisenberg in an uncharacteristically powerful, albeit still awkward, role.

Yet, the greatest intrigue comes from two of the most basic elements of a movie: the writer and the director. They are Aaron Sorkin (“The West Wing” and “A Few Good Men”) and David Fincher (“Se7en” and “Fight Club”), respectively, and they make quite the duo.

“David Fincher is known as a real visual master,” Eisenberg said in a conference call with media. “Aaron Sorkin is known for his incredible dialogue. I was really surprised to see that match.”

Sorkin uses three perspectives to tell the story of Facebook’s creation and growth: Mark Zuckerberg (Eisenberg) deals with his desire for acceptance by creating Facebook. Eduardo Saverin (Garfield) helps out his friend Zuckerberg, but ends up suing him for financial betrayal. The Winkelvoss brothers (both played by Hammer) recruit Zuckerberg for help with their social network, but also end up suing him for allegedly stealing their concept.

“He (Sorkin) has managed to create this multi-perspective, multi-layered story where everyone is right and everyone is wrong,” Garfield said. “That’s not an easy thing to do, and he’s managed to do it.”

Fincher, meanwhile, brings visual prowess to the complex script while getting forcibly intimate with the actors in order to bring out the most natural interpretations of their characters.

“In the first scene of the movie, which is two people talking in a bar, we did the scene 99 times,” Eisenberg said. “And after each time he still had something valuable to impart to the actors.”

Sorkin and Fincher’s merging of styles also produced a surprising amount of laughs for such an intense picture.

“When you read Sorkin’s screenplay, it’s like reading a comedy,” Hammer said. “It’s brilliantly written, and it’s so clever and perfect. But then when you have an incredibly capable, visionary director like David Fincher take this project and adapt it into his own, you get a little bit of that Fincher sense of humor.”

This alliance of Sorkin and Fincher allows the viewers to, in Eisenberg’s words, interact with the movie in a different way because they’re not told who is right and who is wrong.

And in the midst of all this ambiguity and audience participation is the growth of the monster that is Facebook.

“Facebook is so much bigger than any movie about it,” Hammer said. “Facebook is a giant, and we’re just one movie telling a story.”

The timing of the movie’s release only adds to its intrigue.

“It’s fascinating that all this stuff happened and played out only recently,” Garfield said. “It’s really rare that a subject is tackled so immediately after its conception.”

That is not to say the film is simply a product of its time.

“The fact that it’s about Facebook is, to me, secondary,” Eisenberg said. “I think it has some sort of cultural significance, but the story and the themes and the characters are timeless.”