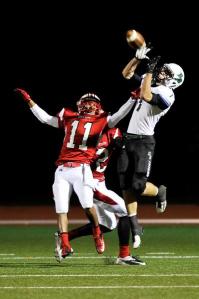 JEFFERSON CITY — As Rock Bridge prepared to take on Jefferson City for its final regular season game Friday night, the Bruins’ game plan was clear to anyone within hearing distance of  A.J. Logan.

“We start strong, we stay strong. All night,” the defensive tackle bellowed repeatedly.

The Bruins took heed, putting up four touchdowns in the first half and going on to win 28-18 to secure a spot as the No. 3 seed in the upcoming Class Six, Division 3 tournament.

Rock Bridge stumbled at first, punting to the Jays after a three and out. But after holding Jefferson City to a field goal, receiver Kenny James began putting Logan’s words into action.

On the ensuing kickoff, James dropped the end-over-end kick. A Rock Bridge fan pleaded “Come on, Kenny!” and the senior picked up the ball with one hand and returned it 92 yards for a touchdown.

“Coach preached to us all week that if we can get a special teams touchdown, the percentages are very high of winning the football game,” Twehous said. “Our front line did a good job, and Kenny — he scared me at first, but he made a big play.”

On the next drive, Freeman Simmons broke loose for a 42-yard run, extending Rock Bridge’s lead to 11.

Two perfectly placed balls to Zach Reuter in the end zone later and the red-clad fans in Adkins Stadium were silenced.

Two Bruins suffered injuries during the game. Shelby Wilson was laid out by a Jefferson City defender on an illegal hit while he attempted to field a first-quarter punt. The safety passed a concussion exam and returned to the game.

“He’s a tough kid,” defensive coordinator Justin Conyers said. “That’s what you love about Shelby. Rodeo-style cowboy out there playing defense for us.”

The second Bruin to go down with an injury was Simmons, whose touchdown came on the first play after the illegal hit to Wilson. Conyers said the early diagnosis is an MCL sprain.

“You always gotta play for your guys,” Conyers said. “I gave (Simmons) a big hug and just told him, ‘Man we’re gonna win this one for you.’ And he knew it was gonna happen. He believed in it, and he was excited as heck after the game.”

He wasn’t the only one.

“This is one of these games, like, if you won the Super Bowl. We going to Disneyland!” James said with a laugh. “But we gotta stay humble, and we won’t get arrogant. We won’t get too cocky about it.”

“Yeah, it’s great to get that third seed,” Conyers said. “But this is a huge win for the Rock Bridge football program overall.