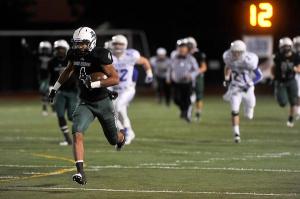 While Bruins coach A.J. Ofodile insisted that the disappointing loss was old news, James said that the loss motivated him as he put in work on and off the field.

James and the Bruins got another shot at Rockhurst on Friday when the No. 4 Hawklets came to Rock Bridge Field. But revenge was not to be had as Rockhurst won 38-21.

“They have a history of winning,” James said. “They’re always a tough competitor. I think we all played our hearts out, they just came out on top.”

As with last year’s defeat, James said Friday’s loss will have a motivating effect.

“We’re definitely gonna have way more passion to win — even more than we already do,” he said.

The teams traded a pair of scores in the first half and found themselves tied at 14 entering the third quarter.

The Hawklets used a slew of quarterbacks, but junior Ahmad Tyler is the one the Bruins will find hard to forget. Rockhurst took command in the third quarter, scoring 17 points, including a fourth-down dive into the endzone by Tyler followed by a 40-yard touchdown pass to Tom Keller.

Rock Bridge had success through the air against Rockhurst, but found themselves plagued by field position woes. The Hawklets started multiple drives near midfield and took advantage.

Rock Bridge also had difficulty with turnovers. An interception in the endzone and a fourth-quarter fumble that was returned for a touchdown erased any hopes of a comeback for the Bruins.

Rock Bridge takes on Liberty High School next week in the Bruins’ homecoming game. For now, it’s back to work for James.